What Your Fan Data Sheet Isn’t Telling You

DC Brushless cooling fans have a long history of being an effective method of cooling electronic circuits. Today, DC brushless cooling fans are found in new applications and are being evaluated by engineers that may not have previously used fans in their products. These engineers may not be familiar with all of the “undocumented features” that are inherent to these types of fans. If the engineer is not familiar with all the characteristics of air moving devices, they could be in for a nasty surprise.
Let’s look at some examples.

Fan manufacturers typically specify the nominal speed of the fan, as well as an operating voltage range. In Figure 1, the datasheet shows the rated voltage as 12 Vdc and the operating voltage range as 6 -18 Vdc. What may not be clear is that all the performance characteristics of the fan, especially speed and airflow, correspond to the rated voltage of 12 Vdc. If the voltage to the fan is decreased from this value, the speed and airflow will also decrease.

As an example, if the fan in Figure 1 was operated at 9 Vdc instead of 12 Vdc, the speed would not be 2500 RPM, but closer to 1300 RPM. Also, the airflow would not be 170 CFM, but closer to 88 CFM. In order to minimize the effects of this, engineers should be sure to minimize voltage drops across power leads and verify the power supply voltage is well matched to the fan application.

In the above example (Figure 1) the speed is given as 2500 RPM. This value is the nominal speed at the rated voltage (12 Vdc). The datasheets from fan manufacturers may not clearly state this value has a tolerance associated with it. Tolerances vary from manufacturer to manufacturer, but tolerance of + 10% is typical. For example, if the fan was to fall on the lower end of the tolerance (so at 12 Vdc the fan was rotating at 2250 RPM) the airflow at free air is the only 153CFM. This potential decrease in airflow must be considered in the system cooling design.

When examining the label on a DC brushless fan or examining a datasheet, the value for the current draw will be given as an average current. What may not be understood is the current draw from this fan is not a DC current. A typical current waveform is shown in Figure 2 below. 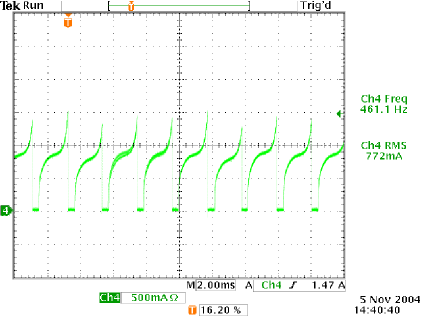 When designing the electronics that interface to a DC brushless cooling fan, it is critically important to be aware of this behavior. Fan peak current draw can be very significant, especially if the ground circuitry is shared with low-level digital logic circuitry. Large switching power currents sharing grounds with low-level digital logic create problems for the digital logic. Also, these large switching currents can create ripple voltage on a DC line if not properly filtered.

The current and speed of a fan as presented in a datasheet are measured in a free air condition. This is the easiest way to measure these fan parameters, but it is an unfortunate choice, as no fan application will actually be operating in a free-air environment. Once a fan is installed into a system, it will be subject to the pressure of that system. 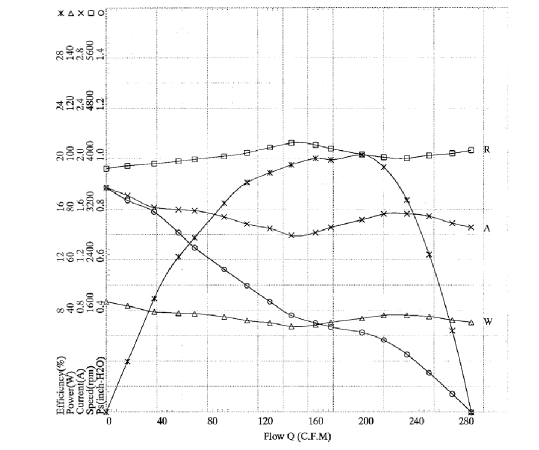 Also of note is that the speed is not constant with increasing pressure. This can be important if monitoring the tachometer signal of the fan and set alarms based on measured speed.
In a typical fan datasheet, only the airflow and pressure curve is shown. It is best to ask the manufacturer for the complete PQ curve to design the system cooling accordingly. Keep in mind that the PQ curve characteristics will vary among different air moving devices (axial, blowers, etc).

Isolation between the fan and the structure it is mounted to should be considered in every system design to reduce the effects of the fan vibration. Also, be aware of any possible resonances between the frequency of rotation of the fan and the mounting structure. We have seen situations were these resonances have created up to 5 dBA of additional acoustic noise at the system level.

There is region in the PQ curve of axial fans that is commonly referred to as the “stall” region. This is a complex phenomenon and will not be covered in detail in this article, but the effects of this region should be understood by the system engineer. 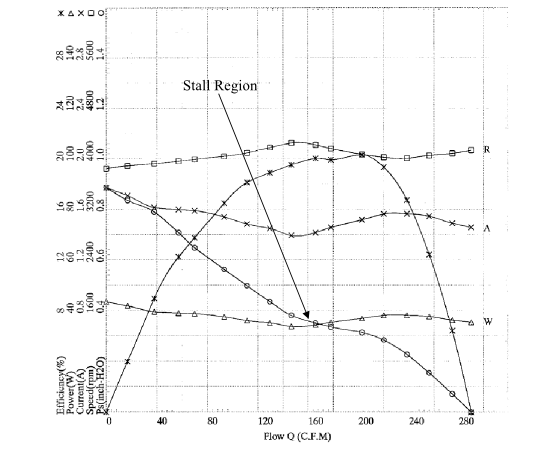 One result of the stall of the blade is that if the fan is operating in a high-pressure region, the exit direction of the air moves away from the axial direction and approaches a diagonal direction (Figure 5). This creates problems if the items to be cooled are placed on the same axis as the fan. Keep this in mind when designing the cooling solution to ensure the proper areas receive the maximum airflow. 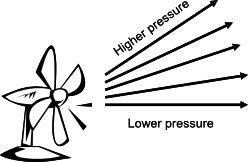 Electronic products are widely understood to have important characteristics that may not appear on a data sheet. DC brushless cooling fans are no exception to this rule. The only way to prevent unforeseen problems in a cooling design is to ask questions about the above fan behaviors to your chosen fan vendors.

Get A Sample
Part No:
Category:

An NMBTC representative will get back to you within one business day.

Sorry, there was a problem submitting the form

Write to us at info@nmbtc.development-place.com with your question. If you need immediate assistance, please call 248-919-2250.

Introduction NMB Technologies Corporation ("Company" or "We") respect your privacy and are committed to protecting it through our compliance with this policy. This policy describes the types of information we may collect from you or that you may provide when you visit the website nmbtc.com (our "Website") and our practices for collecting, using, maintaining, protecting, and disclosing that information. This policy applies to information we collect: It does not apply to information collected by: Please read this policy carefully to understand our policies and practices regarding your information and how we will treat it. If you do not agree with our policies and practices, your choice is not to use our Website. By accessing or using this Website, you agree to this privacy policy. This policy may change from time to time (see Changes to Our Privacy Policy). Your continued use of this Website after we make changes is deemed to be acceptance of those changes, so please check the policy periodically for updates. Children Under the Age of 13 Our Website is not intended for children under 13 years of age. No one under age 13 may provide any information to or on the Website. We do not knowingly collect personal information from children under 13. If you are under 13, do not use or provide any information on this Website or on or through any of its features. If we learn we have collected or received personal information from a child under 13 without verification of parental consent, we will delete that information. If you believe we might have any information from or about a child under 13, please contact us at: GDPR@nmbtc.com Information We Collect About You and How We Collect It We collect several types of information from and about users of our Website, including information: We collect this information: Information You Provide to Us. The information we collect on or through our Website may include: If available, you also may provide information to be published or displayed (hereinafter, "posted") on public areas of the Website, or transmitted to other users of the Website or third parties (collectively, "User Contributions"). Your User Contributions are posted on and transmitted to others at your own risk. Although we limit access to certain pages, please be aware that no security measures are perfect or impenetrable. Additionally, we cannot control the actions of other users of the Website with whom you may choose to share your User Contributions. Therefore, we cannot and do not guarantee that your User Contributions will not be viewed by unauthorized persons. Information We Collect Through Automatic Data Collection Technologies. As you navigate through and interact with our Website, we may use automatic data collection technologies to collect certain information about your equipment, browsing actions, and patterns, including: The information we collect automatically is statistical data and does not include personal information, but we may maintain it or associate it with personal information we collect in other ways or receive from third parties. It helps us to improve our Website and to deliver a better and more personalized service, including by enabling us to: The technologies we use for this automatic data collection may include: We do not collect personal information automatically, but we may tie this information to personal information about you that we collect from other sources or you provide to us. How We Use Your Information We use information that we collect about you or that you provide to us, including any personal information: Disclosure of Your Information We may disclose aggregated information about our users, and information that does not identify any individual, without restriction. We may disclose personal information that we collect or you provide as described in this privacy policy: We may also disclose your personal information: Choices About How We Use and Disclose Your Information We strive to provide you with choices regarding the personal information you provide to us. We have created mechanisms to provide you with the following control over your information: We do not control third parties' collection or use of your information to serve interest-based advertising. However these third parties may provide you with ways to choose not to have your information collected or used in this way. You can opt out of receiving targeted ads from members of the Network Advertising Initiative ("NAI") on the NAI's website. Changes to Our Privacy Policy It is our policy to post any changes we make to our privacy policy on this page. If we make material changes to how we treat our users' personal information, we will notify you. The date the privacy policy was last revised is identified at the top of the page. You are responsible for ensuring we have an up-to-date active and deliverable email address for you, and for periodically visiting our Website and this privacy policy to check for any changes. Contact Information To ask questions or comment about this privacy policy and our privacy practices, contact us at: GDPR@nmbtc.com NMBTC ISO Quality Policy
Close